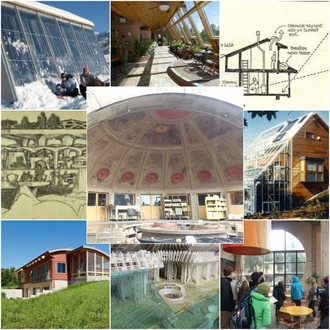 We met passive solar heating methods at Arcosanti. The large spherical buildings were built with intention. Paolo Soleri and his friends angled their buildings to warm themselves in the sun like lizards. The passive solar heating design we saw at Arcosanti is a very common technique. The apses have large south facing windows that catch the sun in the winter and an overhang to shade the building in the summer. A similar concept uses deciduous trees to shade a building in the summer when it has its leaves and let the sun in when the branches are bare in the winter. Another aspect of passive heating that we saw at Arcosanti was the concept of “dressing” a building. They use curtains in the summer to shade their homes and keep them from overheating.
The most important aspect of passive heating is to create an energy efficient building. This means using materials that improve insulation to reduce heating and cooling needs. Concrete, brick, stone and tile are useful in this way. These mediums absorb and radiate heat in the winter to keep a house warm into the night and absorb the heat out of the air in the summer to cool it in the day.
Passive heating uses conduction, radiation, and convection techniques to move heat through a building. Convection is a way to transfer heat through fluid, such as water or air. Conduction moves heat between objects in direct contact. Radiation is heat coming off of an object, like a wood stove.
A convection method used in passive heating involves putting a black tank filled with water on the roof of a building. The water heats up in the sun and moves through pipes into the walls and floor of a building and heats the rooms inside.
Using passive solar heating in a building saves money on electricity bills. Also, any heating needs that cannot be achieved directly from the sun can be gotten indirectly. Solar panels are essentially another form of solar heating because the sun creates energy which is used to heat the home. Any buildings that we decide to include in our design for Windsong or the Borderlands would benefit greatly from passive heating techniques. 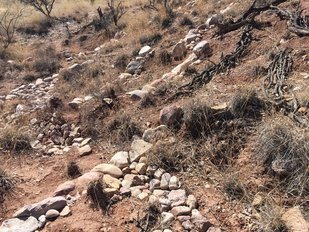 We came across berms and swales throughout our trip in the borderlands. We first saw them at Deep Dirt Farm where Kate was using them to aid food production and use water movement to her advantage. One of the most important things in permaculture is controlling water. Berms and swales are very useful for putting water to work in a farmer’s favor. But, they have applications beyond farming too.
A swale is a shallow depression in the ground created to fill with water. A berm is a small hill used to stop water. When a berm is placed below a swale on contour on a hill they work to slow water moving down a hill and store it in the ground. Trees and plants can be planted in various areas on and around berms and swales to take advantage of this stored water. Also, this small reservoir attracts microorganisms that benefit the soil. To increase water storing capacity straw, old logs, and sod can be placed in berms and swales can be covered in mulch to reduce water lost to evaporation.
Similarly berms and swales can be used to recharge groundwater. Swales can be filled with gravel to increase the speed that water sinks into the ground. Percolation pits are another application of a similar idea. In areas with lots of water moving through a small hole can be dug and filled with rocks. When water flows into the hole it fills up and sinks into the ground. This recharges the groundwater and decreases erosion of a landscape. A common placement for percolation pits is underneath a gutter so that it can capture lots of water coming off a roof.
Berms and swales can be used in urban and suburban areas to decrease stormwater run-off and contamination of nearby bodies of water. Case studies have shown that these methods can retain 65% of stormwater and reduce heavy metal pollutants by 85-100%. Also, it saves money on stormwater control maintenance and curb installment.
Especially because Windsong’s well seems to be in jeopardy, it would greatly benefit from groundwater recharging methods and water harvesting techniques such as these.

​(Tenth Acre Farm, What is a Swale and Why You Need One, https://www.tenthacrefarm.com/2014/02/using-swales-in-the-landscape-part-1/​) 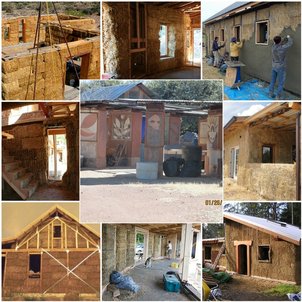 Straw Bale Houses are absolutely incredible. Not only are they awesome, they are also cheaper and utilize a material that otherwise wouldn't have been used. Straw is a fantastic insulator and is better for the environment than traditional insulation. Straw bale houses are constructed by creating a base of straw bales with wooden supports running through them then laying clay over them to protect it from moisture and the elements. The only downside to these houses is that if any moisture gets into the straw, it rots very quickly. Many people think of straw bale houses as extremely flammable but it's actually the opposite because of how little oxygen there is in the bales. The lack of oxygen makes it very difficult for flames to spread. In conclusion straw bale houses are a very good, cheap, environmentally friendly, and awesome alternative to the norm. 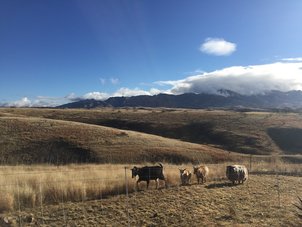 Many people view livestock as a detriment to the land, but the damage they cause can be reversed by using more animals. If we manage livestock properly we can revive our grasslands. Grasslands have evolved with large herds of animals trampling down the grass and pooping and peeing everywhere. Without animals stomping down last season’s grasses, they oxidize and smother and kill the next season’s. This causes the land to go bare and become desertified, which contributes to global warming. When the plants are stamped down by animals, they serve as mulch and begin to decompose into the soil. Allan Savory has developed a holistic planned grazing method that encourages grasslands health.      In several experiments Savory has increased the number of livestock in an area by 400% and moved the herd through the land in a way that imitated nature. In one experiment, 25,000 sheep in one flock were moved through a desertified grassland in Patagonia. After the herd had passed, the land increased production by 50%. When Savory says that he mimics nature, he means that he puts a lot of animals in a relatively small space and then quickly moves them to a new field. This imitates the large, bunched herds that flee from predators in the wild.
Current grazing methods lead to an overconsumption of an area which leads to desertification, water loss, and releases of carbon from the soil. Previously, people believed that our grasslands were disappearing because there were too many grazers. They then attempted to fix the problem by culling herds, which worsened the situation. Allan proposes that if we change our management techniques that we can help fight climate change, hunger, poverty, war, and violence. He hypothesizes that if we graze half the world’s grasslands this way that we can sequester enough carbon to push us back to pre-industrial levels while feeding people with the livestock raised.
Justin is already practicing holistic grazing at Windsong, which is great because it has the potential to revive the hills around the Institute. His work will serve as an experiment for the rest of the grasslands in the Borderlands. If it goes well, I believe that holistic planned grazing has a place within the restoration plan for the Borderlands. 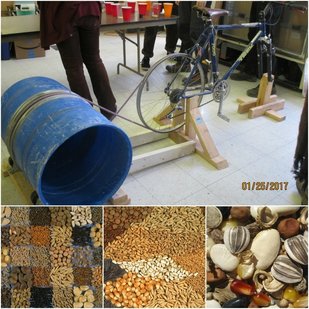 Seed Saving is a very important concept that was introduced to us by Borderlands Restoration In Patagonia Arizona. What so many people don't realize about plants is there are multiple different types of the same plant. For example there are over 50 variants of pomegranates from around the world and more than 200 variants of Agave. Seed Saving is especially important now because of Climate Change. Climate Change will desolate many different types of plants if they cannot adapt quickly enough. For example if only 20 of those variants of Agave are adapted to extreme temperatures than the other 180 variants will die off. It is important to save these variants because if not they may be lost forever. Borderlands Restoration saves seeds by hunting for different variants of plants at different elevation and then cataloging them in a fridge. However they don't only save seed, they also create seed pellets which are clay balls with seeds in the center. Seed Pellets are created using a manual cement mixer which consists of a modified bike, a barrel, some rope, and a few pieces of wood. These seed pellets are used as a tool for distributing native seed back into the landscape without the threat of birds and insects eating the seed. In conclusion seed saving is a very important practice and needs to be continued in order for there to be diversity among plants.