This presentation focused on a practicality that can be implemented in any Permaculture design. Phytoremediation is a revolutionary process that heals environments and directs its primary focal point on helping habitats thrive. As a group we decided to inform the class on how Phytoremediation is being used and ways to improve small scale agriculture in a sustainable way.
The arrangement of slides above is put together in three separate categories. The introduction centers around what Phytoremediation is and diagrams depicting Phytoremediative projects. The second part of the slideshow brings attention to Agroforestry and how phytoremediation can be used within the methods of Agroforestry. The last piece of the presentation concentrates on pond methods and how Phytoremediation is being used today.
Within our group three concepts mentioned in the slideshow above were collaboratively introduced. We decided that connecting Phytoremediation to different Permaculture designs would bring insight to the class for future applications. The presentations message was that small practical contraptions and innovative tools could create a future that may help save the planets health.
By sharing with our peers how small scale systems can be introduced we hope that they also share with other individuals to utilize these methods. If all people begun to stray from the path of destroying the Earth and created better ways to dispose of waste, we could slow down the rate of destruction. Permaculture design and organic-agricultural movements are great examples to share with hope for this planet.
As a group we feel that concepts like these must be presented to society. Our presentation was a glimpse of how much work needs to be, and can be done.
Using Phytoremediation to Clean Up Sites:
Phytoremediation is the direct use of green plants and their associated microorganisms to stabilize or reduce contamination in soils, sludges, sediments, surface water, or ground water. First tested actively at waste sites in the early 1990s, phytoremediation has been tested at more than 200 sites nationwide. Because it is a natural process, phytoremediation can be an effective remediation method at a variety of sites and on numerous contaminants. However, sites with low concentrations of contaminants over large cleanup areas and at shallow depths present especially favorable conditions for phytoremediation. Plant species are selected for use based on factors such as ability to extract or degrade the contaminants of concern, adaptation to local climates, high biomass, depth root structure, compatibility with soils, growth rate, ease of planting and maintenance, and ability to take up large quantities of water through the roots.

The Oregon Poplar site, located in Clackamas, Oregon, comprises three to four acres within a vacant parcel located parallel to the small Mt. Scott Creek stream. The site had been an abandoned grassy field in a primarily commercial and light industrial area. Contaminants of concern at the site were primarily volatile organic compounds (VOCs), resulting most likely from illegal dumping activities. The ground water beneath the site is shallow (two to ten feet below the ground surface), locally confined, and in hydraulic contact with the Mt. Scott Creek stream. These characteristics along with low concentration of contaminants and little to no risk to human health make the site a good candidate for phytoremediation.
Hybrid poplar trees were planted on site in 1998 to remediate the ground water contaminated with VOCs. By July 30, 2002, the trees had not only survived, but shown considerable growth. Four of the larger trees were selected as the focus of sampling because their roots most likely be in contact with contaminated ground water. Although the water and soil samples proved inconclusive, tissue samples taken from the four trees indicated that the trees were actively removing VOCs from the ground water and soil. Although tissue samples from all sections of the trees revealed contaminant uptake, higher contaminant concentrations seemed to be found in the trunk rather than the leaf tissue. The picture above shows the collection of gas and water vapor from a poplar tree at the site. The success of the trees at the Oregon Poplar site supports the notion that phytoremediation may be an innovative technology worthy of nationwide consideration.

The once toxic pits of J-Field, located in the Edgewood area of Aberdeen Proving Ground, Harford County, Maryland, were used as a disposal site for chemical warfare agents, munitions, and industrial chemicals from 1940 through the 1970s. The two most prevalent contaminants of concern in the ground water at the site included Trichloroethene (TCE) and 1,1,2,2-tetrachloroethane (1122). In the Spring of 1996, a phytoremediation study was implemented to determine if the contaminants underlying J-Field could be removed through phytoremediation using various tree species.
Chosen for their rapid growth and high transpiration rates, 183 hybrid poplar trees were planted over an area of approximately one acre in 1996. VOCs and the chemicals they break down into have been detected in the leaf tissue and gas and water vapor expelled by the trees, indicating that the poplars are removing, degrading, and releasing the contaminants of concern. Sap flow rates and shallow ground water levels also indicate that the trees are intercepting and removing the contaminants from the site. Finally, it is possible that the trees may also be enhancing the soil community, although further investigation is needed to determine this. It is estimated that within 30 years, contaminants at J-Field may be reduced by up to 85 percent.
For more information on phytoremediation, download the Brownfields Technology Primer: Selecting and Using Phytoremediation for Site Cleanup . For more information on either of these phytoremediation sites, contact Harry Compton, U.S. EPA, (732) 321-6751, compton.harry@epa.gov.

Use of native plants in phytoremediation provides advantages over other species and helps bring back the heritage of flora lost through human activity. In addition to restoring biodiversity to areas that have been disturbed, remediating Superfund sites using native species provides for wildlife habitat enhancement and conservation and saves money over alternative cleanup methods. Unlike many introduced species, once established, native plants do not require fertilize, pesticides, or watering. As encouraged by the Superfund Redevelopment Initiative, use of native plants in site restoration may serve to restore wetlands and other habitats and create nature parks, sanctuaries, and other green areas.
Two Presidential documents address the use of native species in Federal projects and their protection from invasive or introduced foreign species. The first is the April 26, 1994 "Memorandum on Environmentally Beneficial Landscaping". The second document is Executive Order 13112 of February 3, 1999 - Invasive Species. For more information on use of native plants in restoration of Superfund sites, contact Scott Fredericks, U.S. EPA, (703) 603-8771, fredericks.scott@epa.gov. You can also learn about phytoremediation work being done by some faculty members at the University of Washington. 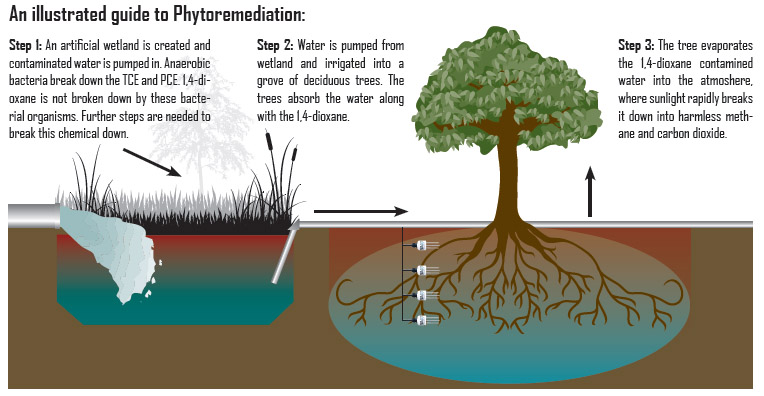 Here is just a small example of hyperaccumulators…

Arsenic – Sunflower or Chinese Brake ferns both store arsenic in their leaves.

Cadmium – Willow which is also an accumulator of zinc and copper, willow has a high transport capacity of heavy metals from root to shoot coupled with a huge amount of biomass production.

Cadmium and Zinc – Alpine Pennycress is a hyperaccumulator of these metals at levels that would be toxic to other plants, although the presence of copper will often inhibit growth.

Salts/salt tolerant – Barley and Sugar Beets are used for the extraction of sodium chloride to reclaim fields flooded with sea water.

It is important to mention that phytoremediation is not an overnight solution to your soil woes but with some careful planning and consideration of time constraints, soil can almost always be remediated using plants… I could ramble on and on about plants so this may have to turn into a multi-part section of this series, we will see…